THE BOYCOTT, THE ONLY WEAPON WE HAVE LEFT

The FIFA World Cup in Qatar will take place. What is there left to do?

Boycott is the last resource we, the football fans, spectators and community, have left to stick to the morals of the game and to show our repulsion towards an institution turned into an ultra-capitalistic and inhuman industry. As untouchable as the Fédération Internationale de Football Association (FIFA) may seem, there is still something left to do against their treacherous system. Boycotting can be done as easily as by not watching the tournament, not consuming the greedy and macabre version of football FIFA is selling to the world. If you refuse to watch their officially licensed streams on TV or on the internet, less money will flow into their accounts. You can also refuse to buy products from their big sponsors (Adidas, Coca-Cola, McDonald’s, WANDA Group, Hyundai, Qatar Airways, QatarEnergy, VISA, Budweiser, BYJU’S, Crypto.com, Hisense, etc.). Avoid giving money to anything directly related to the FIFA World Cup so they understand in the only terms they do, money terms, that we are completely against the way they conceive football. Finally, spreading the word about the crude reality of this shameful Cup and the institution responsible for these acts, FIFA, will help shine light on the problem and inform more people who could participate the boycott as well. Please spread the word.

As human beings, football fans and members of an international community, the scandals of the upcoming FIFA World Cup Qatar 2022 have shocked us for the last 12 years. Many of these problems and scandals are still unaddressed and fully ignored by the people that caused them. Here are the main ones :

FIFA has actively hidden its inner workings as an institution, as well as its preparations and execution of the tournament in Qatar 2022. Turning against whistle-blowers inside their institution, ignoring journalists and their investigations and findings, FIFA has continued evading responsibility.This hasn’t stopped them from hypocritically flying the FAIR PLAY, the Rainbow, and their Diversity & Inclusion flags up high during their official events. The situation inside the Gulf country isn’t better for sure. The condemning of whistle-blowers is very much active in the nation where, on top of that, executive, judicial, and legislative powers are at disposal to manhunt anyone who opposes the conditions of the event.

As fans we have seen football change rapidly and for the worst. To some extent, evolutions like excessive sponsoring on the jerseys, official partnerships between betting houses and national leagues, ludicrous prices for new signings every summer and always higher ticket cost have come to be accepted by the general public. But the greed of the businessmen who run these competitions sees no end. New international competitions of elitist sort are being proposed and forced by FIFA internationally and by its confederations continentally. An even more elitist version of the UEFA Champions League and a FIFA World Cup every 2 years is what the football world wants, according to this suited businessmen that haven’t stood on the tribunes jumping and chanting once in their life. All this is to the detriment of the fans, especially those from the working classes, who can no longer afford the tickets. For years we have been squeezed every dime to be able to keep up with our passion: paying for expensive attire, keeping up with ticket prices, paying for endless different streaming services. We had to accept all this reluctantly.

Stay informed and spread the word, here you will find links about the criminal institution and the businessmen directing it, as well as the scandals involving the FIFA World Cup Qatar 2022:

Revealed: 6,500 migrant workers have died in Qatar since World Cup awarded, The Guardian

Working Conditions in Qatar Ahead of the FIFA World Cup 2022, Amnesty International

I UNDERSTAND THE PROBLEM,
BUT I CAN’T MISS THE SHOW…

If you are a hardcore die hard fan of football, you know that not watching the main event of our beloved sport, which we wait for four years, is terribly hard. Specially if your nation’s finest will be sporting their colours in a search to lift the trophy. If this is too hard for you, if you cannot keep your eyes of the tournament, we kindly ask you to watch a non-official stream and to turn your adblockers on when watching highlights on official channels : this way, they will not get revenue from you.

As easy as changing the channel, having a dinner with your friends or making a movie night on any given gameday you will show your discomfort towards a tournament that has spun out of control. So tune in your favourite games from previous World Cups from this or from the last century; rewatch those legendary matches that belong to the common football soul with your friends and family, rewatch your country’s history over the World Cups. We understand that fever that chases us for four years is now running high, that’s why we also leave you a full program to watch instead of this shameful World Cup.

In Paris, an alternative daily program of historic World Cup matches will be offered throughout the tournament, at : 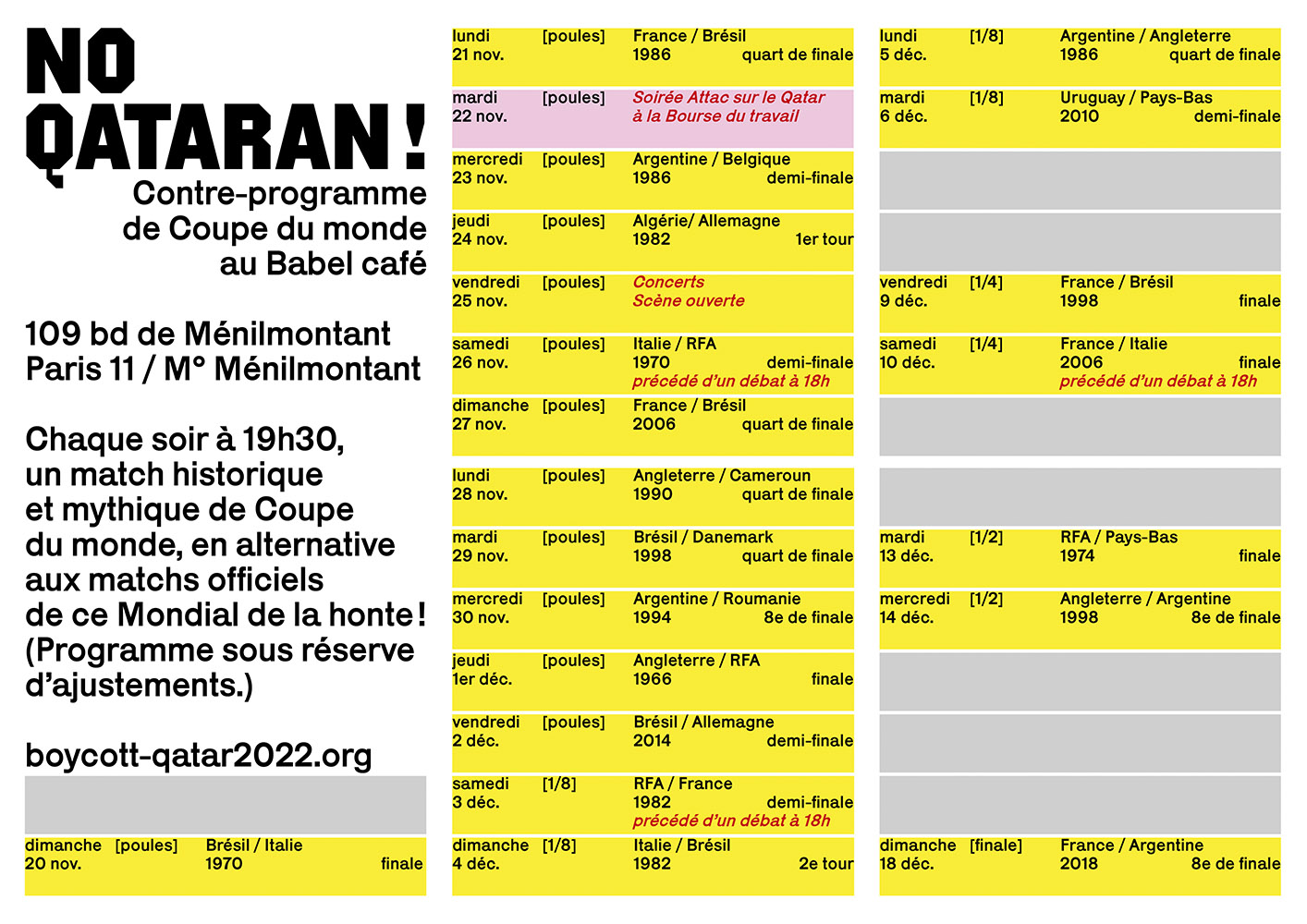 YOU CAN ALSO WATCH…

The Miracle of Bern, Sönke Wortmann (full movie, in german)

The Hand of God, Paolo Sorrentino (trailer, available on Netflix)

The English Game (available on Netflix)

Sunderland ’Til I Die (available on Netflix)

The Figo Affair: The Transfer that Changed Football (available on Netflix)

DISSEMINATE THE POSTER AND THE BOYCOTT CAMPAIGN

Support the campaign by talking about it, by sharing it online. Web and printable versions of the campaign poster are available for download below. You can also get the poster and/or the sticker of the campaign to spread them.

If you are able to organize the transport, the distribution, and maybe the local printing of posters and stickers in other cities, don’t hesitate to reach us: boycott-qatar22@proton.me 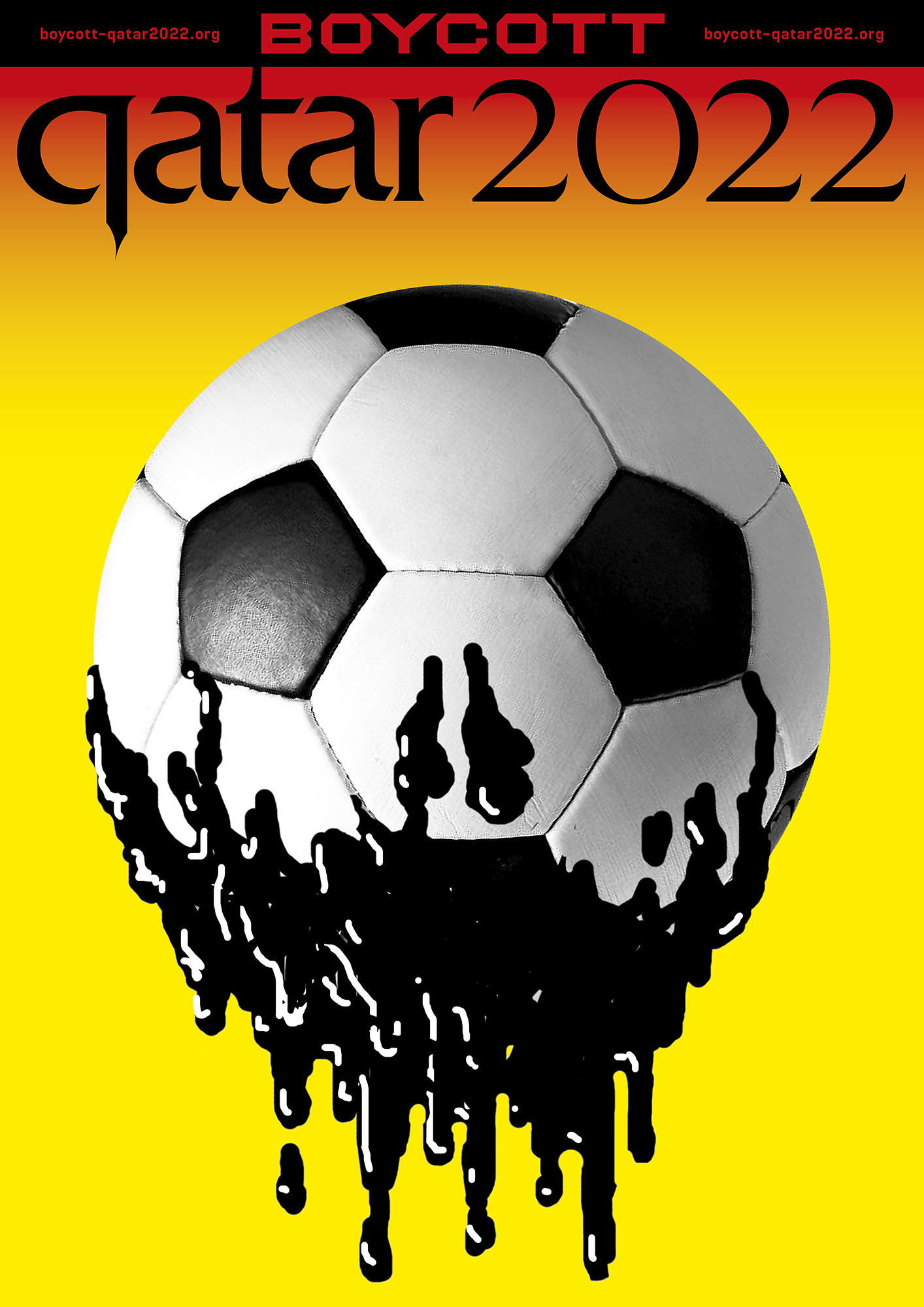 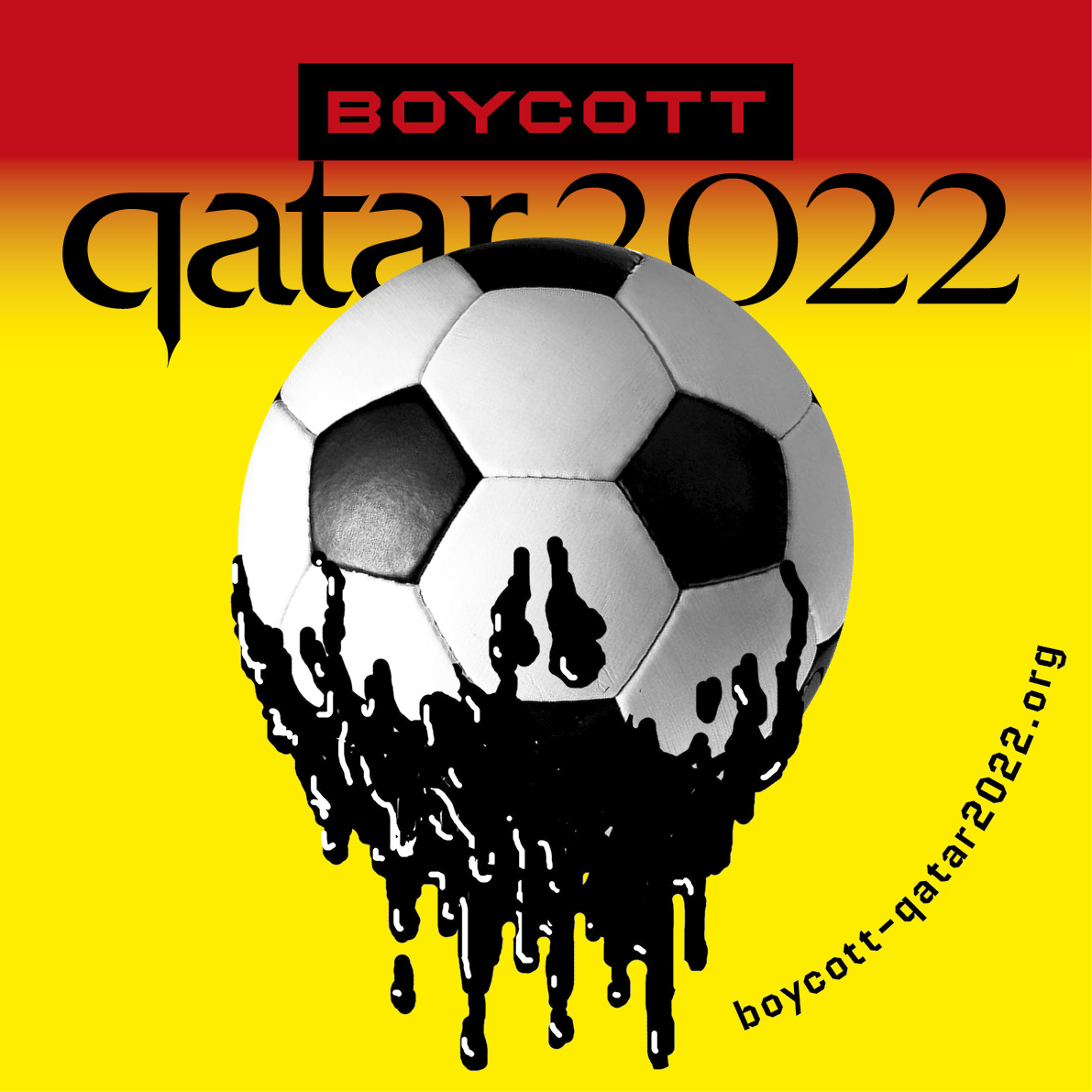 SUPPORT THE CAMPAIGN WITH A DONATION

You can support this boycott campaign by making a donation of an amount of your liking:

First, this will allow us to reimburse the costs incurred for the printing of the posters and stickers. Second and more importantly, the remaining money will go to the NGO […] which supports the families of migrant workers who have died on the construction sites of the World Cup in Qatar.

This campaign, this website, these posters, were born from the joint work of 2 people: a German student and supporter, David Streiber, and a French graphic designer and activist, Sébastien Marchal.

David is a student and lifelong football fan. Since 2016 he has had contact with FIFA and has worked together with them in many projects. Within the FIFA Fan Movement, an international group of football fans that he is a founding member of, he was one of the first voices to raise awareness of the upcoming World Cup. After years of sending signed requests alongside other members to publicly speak about the Qatar 2022 World Cup inside the Fan Movement and of repeatedly being silenced by an institution that insisted had given the fans a voice it came to a turning point. Art is the best form of resistance; creating is the best way of battling destruction. With this in mind, David started looking for people who were as worried as him about the inhumanity of the situation and who wanted to do something about it.

Sébastien has been interested in social and geopolitical issues for a long time, he has created many posters on many political and social subjects. He felt concerned by the horrors of the Qatar construction sites from the first articles he read on the subject in 2015, when the media indifference was almost total. Even then, there was talk of 400 deaths. When the Guardian’s investigation evoking 6500 deaths appeared on February 23, 2021, he decided to create an image to exorcise his anger and helplessness. The memory of Alain Le Quernec’s poster against the World Cup in Argentina in 1978 came to mind: his image would resonate with this previous «cup of shame».

Sebastien’s poster was selected by an German political poster competition, Mut zur Wut, and exhibited in several cities in Germany. David, who saw the poster in Heidelberg, contacted Sebastien. That’s how it all started… 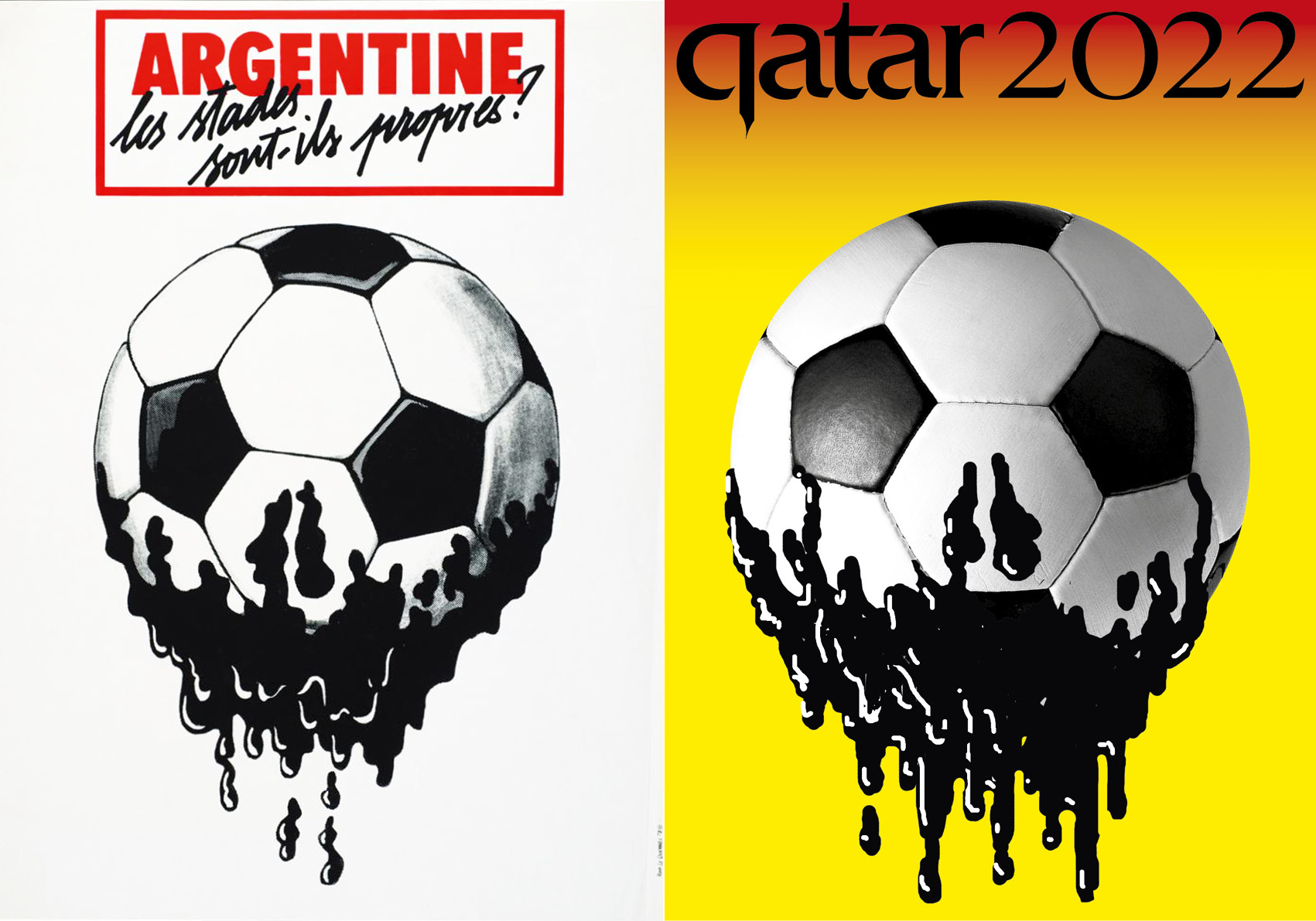 The poster you see on the website, and hopefully on the streets, is a creation from french graphic designer Sébastien Marchal. 44 years ago, another french graphic designer, Alain Le Quernec, created a memorable poster to denounce the FIFA World Cup in Argentina, where Rafael Videla’s bloody dictatorship was raging. The mud of the stadiums where opponents had died smeared the ball that had become a skull. In reference to this previous «cup of shame» and in homage to Alain, Sébastien Marchal took up his graphic idea to denounce this new mass grave that is supposed to welcome a party. Oil has replaced mud, but the responsibility of FIFA in this soiling of football is the same. However, in the words of the late Diego Armando Maradona: «La pelota no se mancha» – «The ball does not stain».

We are more than willing to work together with other campaigns, counter-events, movements and different types of protest against modern football, FIFA, and specially Qatar 2022. For inquires and more, please reach us under the following email address: boycott-qatar22@proton.me